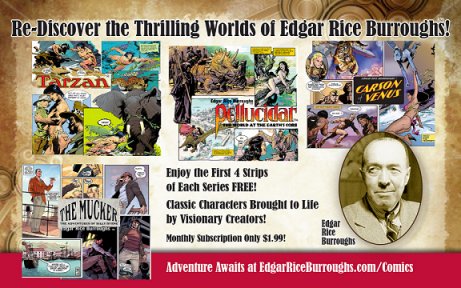 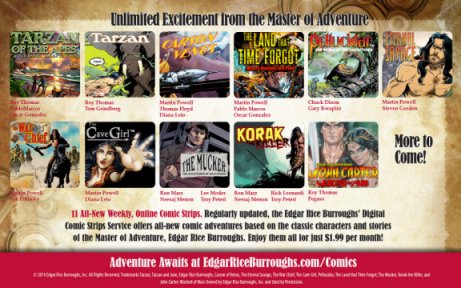 Edgar Rice Burroughs, who died 140 years ago March 19, not only created a batch of memorable characters, but he also put in place a base for a successful business operation that has survived him by 65 years.
From the very beginning, when he sold his first novel, Under the Moons of Mars, to The All-Story, he was shrewd enough to sell it for first-publication rights only, and that business acumen remained through the years with trademarks, selling of movie and merchandising rights, development of radio programming and control of the publication of his own books.

Nowadays, we all know there has been a renaissance the last several years at Edgar Rice Burroughs, Inc., typified by such things as the authorization of the John Carter movie, the recent and upcoming Tarzan movies, and new novels such as Jane: The Woman Who Loved Tarzan and The Martian Legion.

These media projects all demonstrate the efforts of a company that is actively promoting its products, just as ERB himself did years ago.

But perhaps topping all of these new ventures is what we find today on the website of Edgar Rice Burroughs, Inc., itself.

Just as Burroughs, back in the 1930s, authorized the adaptation of his original Tarzan novels as daily comic strips, so ERB Inc. has created new comic strip versions of Tarzan, as well as other ERB titles.

These include not only comic versions of the original stories, but some of them feature new adventures as well.

Success is contagious. Not only does ERB Inc. benefit from doing this, but it is providing employment for a crew of writers and artists as well, and those creators are, in turn, having a showcase for their work which will help them land other jobs in other areas of their craft.

By maintaining control of its own product, ERB Inc. is able to do something that fans have only talked about over the years -- combining Tarzan of the Apes with Jungle Tales of Tarzan. When the weekly strip story of Apes reached a certain point, the story line began switching to the events in JTT. So, at last, a truly omnibus account of young Tarzan's life in the jungle is being created.

Other strips retelling the original stories are The Monster Men, The Land that Time Forgot, The Lost Continent, Jungle Girl, Cave Girl, The Mucker, The Girl from Hollywood, The Outlaw of Torn, The War Chief, The Eternal Savage, John Carter of Mars (starting with A Princess of Mars) and Carson of Venus (starting with the story line for Pirates of Venus and now about finished with Lost on Venus).

Original stories now appearing include a modern Tarzan story, a Korak the Killer story line, and Pellucidar. The Pellucidar entry recaps the basics of the original book in the first three entries, and then moves on to newer adventures.

The art can be described as wonderful to spectacular, as several illustrators each bring their own unique style to the pages, and the colorists fill those lines with the most glorious of hues. Cathy Wilbanks, archivist at ERB Inc., wasn't exaggerating when she said in a post to the erbcof fan email list that "the strips are really amazing and well done."

Jungle Girl, for example, besides having panels filled with exotic scenes and gorgeous coloring, also features the unique aspect of a new title for each week's strip, rendered in the lettering font from the cover of those old 40-cent Ace paperbacks.

And all of this for just $1.99 a month. And, in contrast to the way the world usually works, the price has never gone up, despite the addition of a new strip every few months.

Jim Sullos, president of ERB Inc., has said the company wants to keep the price low and make its money through expansion of the subscriber base rather than by charging people more.

And it would appear to the casual, reader, who is not privy to the state of ERB Inc's bank balance, that the subscriber base is, indeed, expanding, as evidenced by the pace at which ERB Inc. adds additional comics, and now has even made some of them available in Spanish language: John Carter, The Girl from Hollywood, Jungle Girl, The Outlaw of Torn, The Monster Men and The Lost Continent.

Are you a subscriber? Why not support this wonderful work and tell your friends.

I have heard some fans say they will wait until all of the strips are complete, subscribe for one month, and read them all. That kind of defeats the purpose. Can't we all afford $2 a month to support this marvelous effort and enjoy the comics as they are published? Twenty-four dollars a year is the price of one meal for two people at the local eatery.

Besides, we have no way of telling if ERB Inc. is going to keep all of these strips up on its website forever! So, best to read them now, while they're there, rather than expect them all to be there whenever we get ready to part with a one-time payment of $1.99!

Just because it is publishing its own comics, it doesn't mean that the company has cut off licensing of the product to others. Although there is currently no active daily or Sunday newspaper strip, Tarzan lives on in special comic book editions by Dark Horse. And Dynamite is doings comics based on ERB's Mars stories. A graphic novel of The Outlaw of Torn was published a few years ago, and there were also special one-shot comics in recent years of The Lost Continent and The Land That Time Forgot.

But rather than depending on other companies to get interested in all the other ERB stories, ERB Inc. has adopted a "do it yourself" approach, just as ERB himself often did.

Fans have lots of reasons to be grateful to the present leadership of Edgar Rice Burroughs, Inc.

BILL HILLMAN
Visit our thousands of other sites at:
BILL AND SUE-ON HILLMAN ECLECTIC STUDIO
All ERB Images© and Tarzan® are Copyright ERB, Inc.- All Rights Reserved.
All Original Work © 1996-2015 by Bill Hillman and/or Contributing Authors/Owners
No part of this web site may be reproduced without permission from the respective owners.