In an overview of Edgar Rice Burroughs' best books, The Mucker usually appears near the top of any list. Both Richard Lupoff and Sam Moskowitz gave the novel high praise, calling it a virtual catalogue of the pulp genre (in some lit'ry circles that would be a backhanded compliment). But such praise is almost exclusively given to the first novel of this two-part adventure. The sequel, The Return of the Mucker, is regarded as little more than a typical western, with hoodlum-turned-hero Billy Byrne galloping about revolutionary Mexico and saving Barbara Harding from various fates worse than death.

To give the story its due, The Mucker does remain one of Burroughs' highest achievements. The opening chapter is one of his best pieces of writing, with early Chicago vividly recreated through tight but colorful descriptions, with a heavy use of colloquial language and snappy dialogue. For a man who was paid by the word this one chapter shows that Burroughs could create a full-blown world with remarkably little verbiage. It also shows that Burroughs, when he put his mind to it, could do well in a reality-based novel. His ability to recreate Chicago on the printed page primarily through action and dialogue was far more adept than a large percentage of historical novelists whose facts are thrown in as if their books were being used in Western Civ 101.

The remainder of The Mucker falls from this high point but the action certainly never falters, and an adventure tale was what Burroughs was writing. The majority of the book has Billy Byrne duking it out with a lost colony of Japanese samurai on a Pacific island. The weakness of this segment is that the lost race is only lightly sketched in, with just enough details given to serve the head-long pace of the narrative. Such was the fault with many of Burroughs' lost races, making such novels as Jungle Girl and several Tarzan tales little more than enjoyable diversions. Burroughs of course saw nothing wrong with that, but it is one of the many instances when the reader may wish that Burroughs had spent a little more time in shaping his story rather than dashing it off to collect another paycheque.

The Return of the Mucker begins with Billy Byrne coming back to the city that spawned him, Chicago. Burroughs often said that he identified with his heroes, and while his background was not as sordid as the mucker's, Burroughs could easily have been describing himself when detailing Billy's homecoming: "The thing that exalted Billy was the idea that he was coming back to show them. He had left under a cloud and with a reputation of genuine toughness and rowdyism.... He wanted some of the neighbors to realize that he could work steadily and earn an honest living...."

Burroughs may not have been so tough that he could eat nails, but after punching cattle as a youth (and being perceived as rowdy by his schoolmates when he returned), and unsuccessfully sticking it out in the army and countless other jobs, Burroughs had a reputation (particularly with his family) that he was more than glad to have conquered.

But things don't go as well for Billy Byrne, who flees Chicago because of a false murder charge. Becoming a knight of the open road (a calling that has lost all of its romanticism -- if it really ever had any), Billy hitches up with Bridge, an enigmatic hobo who becomes the mucker's guide to intellectual enlightenment. Through Bridge Burroughs detailed his own views on popular poetry and fiction, and how these can lead to a greater appreciation of the world around us.

With Bridge Burroughs was paying a compliment to one of his favorite writers. The name "Bridge" is itself a pseudonym. In explaining his moniker Bridge relates that it was "just a name a fellow gave me once up on the Yukon. I used to use a few words he'd never heard before, so he called me 'The Unabridged', which was too long. The fellows shortened it to 'Bridge' and it stuck." One of Burroughs' contemporaries spent time as a Yukon gold miner and as a tramp, and achieved fame writing of those grueling times. He also tended to be somewhat loquacious in his fiction. Bridge gives his full name as "L. Bridge"; with a name like "London Bridge" Burroughs poetry-quoting hobo can be none other than Jack London.

It is through a writer looked down upon by the genteel critics of his day that Burroughs expressed his philosophy of literature. The Mucker detailed Billy's physical and moral rejuvenation; in The Return of the Mucker Burroughs must save his hero's intellectual soul. This is achieved, oddly enough, through poetry. Bridge's favorite poets (and we may assume Burroughs') are Robert Service, Rudyard Kipling, and Henry Herbert Knibbs and through hearing them constantly quoted Billy has many preconceived notions dashed to bits. "I always had an idea they was sissy fellows," he thought, "but a guy can't be a sissy an' think the thoughts they musta thought to write stuff that sends the blood chasin' through a feller like he'd had a drink on an empty stomach."

Burroughs at first regarded his own life of a man of letters as somewhat sissified, but after achieving a degree of success at his craft he could look at things objectively and see that what he did was worthwhile.

After years of hearing from readers Burroughs knew that he was able to send the "blood chasin' through a feller," that the lowbrow literature which he produced (as well as read) had an effect upon people. It did not matter if what he wrote was not deemed literature. "Because one man speaks better English than another," Bridge explains, "or has read more and remembers it only makes him a better man in that particular respect.... Now maybe we are both wrong -- maybe Knibbs and Kipling and Service didn't write poetry, and some people will say as much; but whatever it is it gets you and me in the same way, and so in this respect we are equals." Or as Burroughs explained the success of Tarzan of the Apes -- it was the story that got the reader, not the writing.

We know that as an adult Burroughs read London, Zane Grey, Owen Wister, and popular travelogues, among other things. A taste for these would not have been nurtured by his early formal education, which he always held in contempt. As dramatized by someone like Waldo Emerson Smith-Jones in The Cave Girl, Burroughs didn't think school learning had much value. (He was being rather unfair: his Latin classes helped him to create many exotic names and his geology classes helped him to create several lost worlds.)

Burroughs was a great believer in self-education, of learning because you enjoy learning and not because you have to; Billy Byrne, with no educational background to speak of, discovers he can open his mind just by hearing poetry. "I never knew the country was like this," he tells Bridge, "an' I don't know that I ever would have known it if it hadn't been for those poet guys you're always spouting." Perhaps by including the poetry in his novel Burroughs hoped to open a few of his readers' eyes as well. 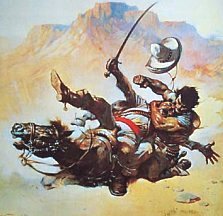 There is always a danger of the reader seeing more in a work of fiction than the author intended, but from years of reading Burroughs it is apparent to me that he was one who never was afraid to express his own views in his writings, thus giving a realistic grounding to his fantasies. Even though he wrote to entertain, Burroughs was not above putting a message in his fiction. If the preceding essay is perceived as making too much of a pulp novel then it is appropriate to end with one example of where Burroughs playfully recreated a piece of his own history in The Return of the Mucker. In 1897, following his discharge from the cavalry, Burroughs escorted a trainload of his brother's cattle from the Mexico-Arizona border to Kansas City. Billy Byrne and Bridge follow in reverse this route to old Mexico, and so we get an idea of what Burroughs did on that dusty trip.

In Kansas City the heroes find a rooming-house "where they could get a clean room with a double bed for fifty cents." In El Paso was a saloon that permitted "a very large consumption of free lunch upon the purchase of a single schooner of beer." Unfortunately you had to drink the beer. "I sometimes think they put mothballs in it so it won't spoil," observed Bridge, who was apparently experienced in the drinking of bad southwestern brew. The beer was no better south of the border where Billy drinks a bottle, "the temperature of which had probably never been below eighty since it left the bottling department of the Texas brewery which inflicted it upon the ignorant." One wonders if beer like this was also served to Burroughs at Fort Grant.

Edgar Rice Burroughs never would have condoned close readings of his works, of trying to make a simple adventure tale more than just a simple adventure tale. He might have perceived a review like this as being written by "one of these here paper-collar, cracker-fed college dudes that don't know nothin' else 'cept writin' in books." However, one of the pleasures in reading a Burroughs novel is that you get to know Burroughs. The Return of the Mucker remains an entertaining adventure tale but it is also, along with many of his books, a means by which you can meet a man dead more than fifty years.

BILL HILLMAN
Visit our thousands of other sites at:
BILL AND SUE-ON HILLMAN ECLECTIC STUDIO
ERB Text, ERB Images and Tarzan® are ©Edgar Rice Burroughs, Inc.- All Rights Reserved.
All Original Work ©1996-2006/2010/2022 by Bill Hillman and/or Contributing Authors/Owners
No part of this web site may be reproduced without permission from the respective owners.